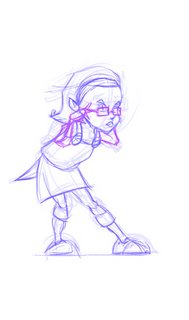 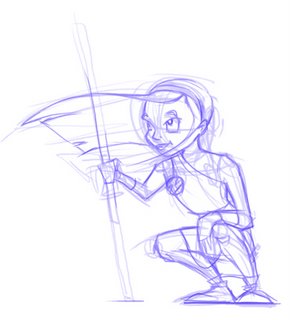 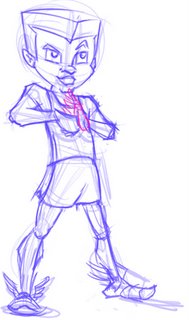 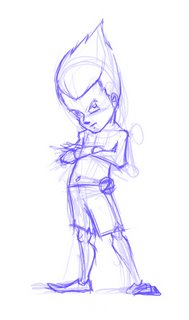 Here are some preliminary sketches for the Li'l Gods - I'm gonna give myself a few days distance from them then begin to give them their treatment. Once i've done that i'll post my old versions for a laugh :)
Posted by Pickthall

These are so cool. My faves are the Hermes character and the one just above that (Diana?). I also love the expression of the one right at the top, but I'm finding her screen-left hand a little hard to read. She's doing a hands on side of head, tongue stuck out thing, yeah?

Great prelims man. These are going to rock.

Sorry, it's Aphrodite isn't it? I yam a fool.

Had another thought: is Apollo going to be the rebel of the gang? I think you could push his attitude a little in this shot: lower his eyebrows, narrow his eyes a little, make that pout more pronounced. The other characters are really big on character, just OTT enough to make them fun and immediately understandable. This guy is still a little vague.

I am *really* looking forward to the comparison shots.

Thanks man, They are from the top, Athena (whos doing a temple touching jean grey type thing, her powers will be controling beasts) then Aphrodite, gymnast, hermes - a right-on brother whos an athlete and apollo, brooding god of sun. Im taking a break as these are on DB so im awaiting crit then i'll colour them.

Apollo is a little weak on 'radness' :)

Ha ha! Nah, his radness level is fine (check that hair!), I just thought you could push his expression a little. You "get" the others immediately: they're expressive and larger than life, but the Apollo sketch seems a little more timid somehow. You know what I think it is? His head's a little small, so we're not seeing the eyes or the mouth as clearly as we are, say, on the Hermes.

The Hermes totally rocks by the way. The lower legs are really great - taut and muscley - and his expression is top.